Gumroad: go to the store page

Time Tree is a Blender addon which adds a new way of dealing with Shot sequences using nodes instead of the common linear timeline.

Idea is to speed up your iterative process of finding the best timing and sequence whether you’re working on a storyboard, montage or etc...

Willing to reduce some workload of storyboarding iteration, I thought that instead of using a linear timeline we could maybe have some kind of non linear time tree.

And it actually ended up very promising 😄

The idea is quite simple, a node represent a camera shot with its own settings like:

The addon is installed just like any regular Blender addon:

Most of the time, you should either uninstall the old version first or remove it rather than “Overwrite” it, before installing the new one.

In either case, you may need to restart Blender if you experience problems once the new version is installed, to make sure nothing from the old version remains in memory.

Just create a Time Tree workspace with the “Add Workspace” ‘+’ button next to your workspace tabs.

The Time Tree workspace consists of one Time Tree node editor window, one 3D Viewport window and a Timeline window. Once you have opened a Time Tree node editor window, create a new Time Tree by clicking on “+ New”

The Header & Panel of a Time Tree window share the same interface, the only difference is the absence of the “Create Sequence” button on the Header.

By clicking this button, you’ll be able to play the current Shot sequence starting from the active Shot Node.

You can scrub this progress bar to change the playback of the current Shot sequence.

When enabled, this button will create the VSE strip sequence for you by reading the whole Shot sequence which includes the current active Shot node.

If a workspace named “Video Editing” is present, it will also directly switch to that workspace.

To keep things well organized, the video sequence will come with its own new scene, named “ShotSequence” (then “ShotSequence.001” etc).

From each Shot node will come a new scene named after its own shot, allowing it to play with unique composition.

That composition is created from the source scene, so make sure that you created one before pushing that button if you need a particular compositing on each Shot.

There are two ways of creating new nodes:

From these menus, you’ll be able to add: 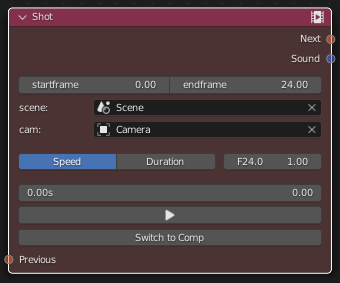 Sockets used to link previous and next Shot, Switch or Join nodes.

Socket used to link Sound nodes, as many as you need.

Actual scene and camera used in the Shot.

If Speed is selected, the number input field is a time multiplier.

When Duration is selected, the Shot duration will match the number of frames entered in the number input field.

You can scrub this progress bar to change the playback of the Shot.

Play the Shot in a loop.

When “Compositing” workspace is present, it will switch to that workspace and the relevant scene containing the current Shot. 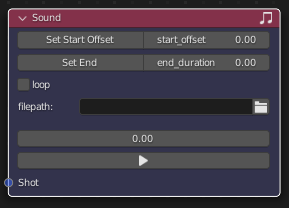 Socket used to link to the parent Shot node.

start_offset is relative to the start of the current Shot, in second.

end_duration is relative to the start of the current Shot, in second.

Clicking on Set End will compute a new end_duration value to match the current global progress time with this formula:

The sound file loop until reaching the end_duration time.

File path to the sound file to play.

⚠️Make sure to use global path (uncheck “relative path” when selecting the file).

You can scrub this progress bar to change the playback of the Sound.

Play the Sound in a loop. 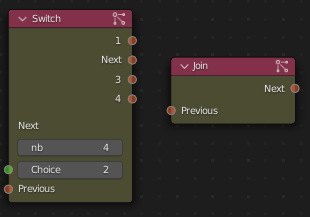 This node is used to choose which will be the next Shot, Switch or Join node.

Changing the nb field will allow you to change the amount of out sockets.

You can link as many of Shot, Switch or Join nodes to the Previous socket.

Then, like a regular Shot node, only one link to a Shot, Switch or Join node is permitted.