In the video I play with the maximum amplitude parameter, then show different random Spectrum.

I first gave it a go at the GPUGems way of doing this, but in the end I didn't use any of these because they implied too many artistic calibrations IMO and it's very easy to end with less realistic water movements.

Also, as many said before me, it seems that their Normal computation is not right.

So I simply referred to the wiki page on Gerstner Wave, and used these formulas: 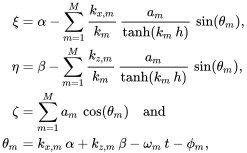 Additionally, the material has:

- Blurry refraction depending on the water depth

- Foam where it should have some...

- Wind direction response via filtering the amplitude waves with a FlowMap

Note: Since this material is for another bigger scene, it uses a non scene related DepthMap & FlowMap hence the wrong water color and weird wave directions.